Rosina immigrated to New Zealand from The Netherlands at the age of seven. Stories tell of many drawings made on The Waterman during a six weeks trek across the seas. In New Zealand she studied drama, classical ballet and modern dance, and was a dancer in musicals and other stage productions in Auckland theatres. Theatre remains a passion and influence in Rosina’s art practice.

Rosina returned to The Netherlands, travelling between worlds on the Greek cruise ship Australis as a dancer, dance instructor and entertainer, and worked as a tutor, dancer and choreographer for amateur dance companies in The Netherlands. Her passion for Greek music and dance motivated some years of International Folkdance Training in Amsterdam resulting in varied art and stage experiences, the award of a Diploma of International Folkdance as Tutor, and drawing and painting commissions through which she explored and interpreted the richness that dance and culture can bring to theatrical productions and art practice.

One of the initiators of Atelier de Haagse School, an art academy for students with an intellectual disability in The Hague, Rosina was staff preceptor, tutor and mentor of these students. In 1995, she was awarded a Bachelor of Fine Arts Degree at the Royal Academy of the Arts in The Hague.
Rosina returned to West Auckland from Europe in January 1998, exhibited in Portfolio Gallery with Warwick Brown in Auckland City, created a mural on the hoardings of Auckland’s iconic Civic Theatre receiving a merit award from Nigel Brown, and introduced herself to the Auckland art scene.

To engage with other artists and to extend her art practice in the Auckland area, Rosina undertook a Master of Fine Arts Degree achieving First Class Honours at Whitecliffe College of Arts and Design, Auckland, in 2003. Her studio research focussed on the use of drawing, painting, photography and photopolymer etching to create Tribute, an artist’s book within an installation.

Meanwhile Rosina taught at Henderson North School, and was part time Art Tutor of children and adults for Corban Estate Arts Centre’s art classes and Kid Arts Festival workshops, that led to the creation of several installations for CEAC.
Moving to Mangawhai Heads in March 2015 led to Rosina’s participation in the September Art Trail, in MAI group exhibitions in the new Mangawhai Artists Gallery, and to 2 shows of work with Ian McGowan in 2016.

2017 saw Rosina’s creation and proposal to MAI of Project Stingray realised as a vibrant Free Community Art Event, an Exhibition with a grand Opening, and the permanent communal art installation on the exterior wall of the Mangawhai Artists Gallery. The community responded with “we want more art events!”.

So…. 2018 saw Rosina’s new creation with MAI artists and the Community come to life and explode in a nocturnal 3D exhibition, turning the Gallery into a magical NZ Bush scene, “ Magical Mangawhai Goes Bush! One Moonlit Night!…” in spectacular UV lighting and fluorescent paint.

Rosina continues to create projects and to extend her art practice, and currently works in her home studio preparing for a number of upcoming exhibitions.
​
Rosina can be contacted for studio visits and art classes: ph.09 431 5088 (answer phone)
or email rosina@rosinakamphuis.com
Rosina’s website: rosinakamphuis.com
Rosina exhibits regularly and in August 2019 she was one of seven Mangawhai printmakers in "Seven Impressions" at Mangawhai Artists Gallery. Her three images are below: 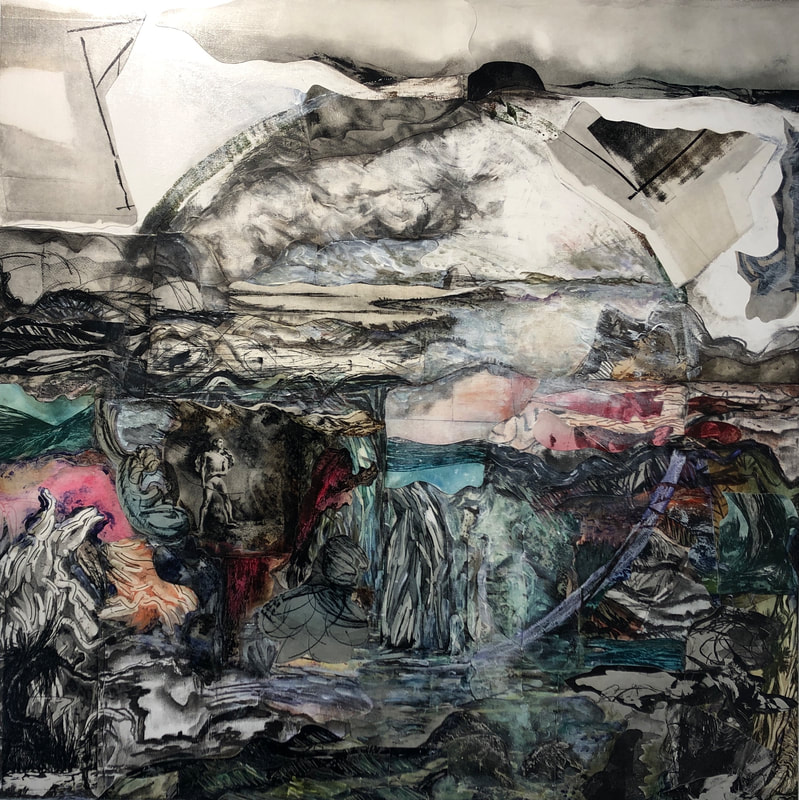 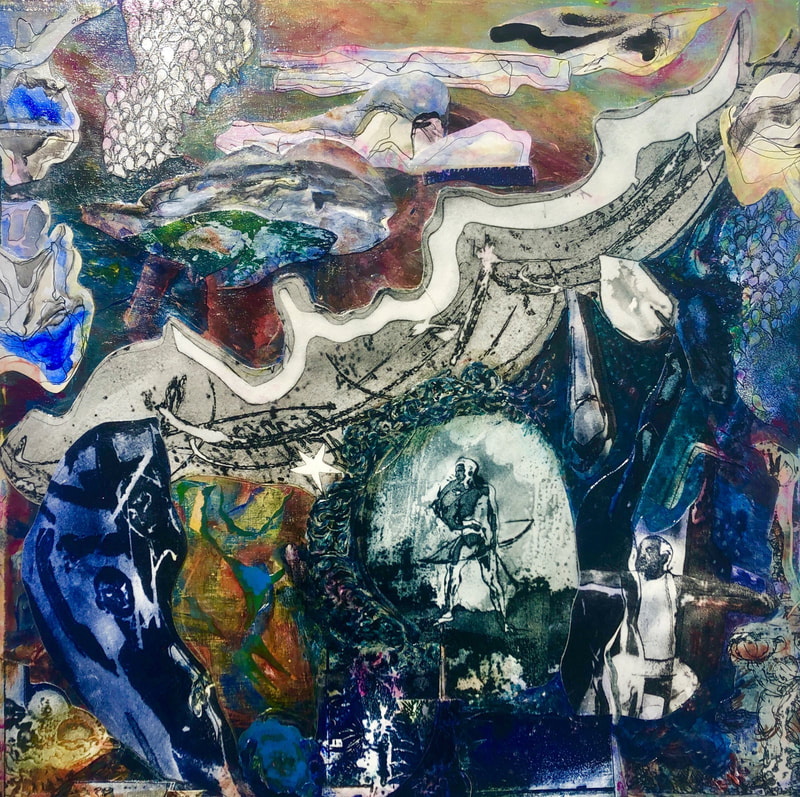 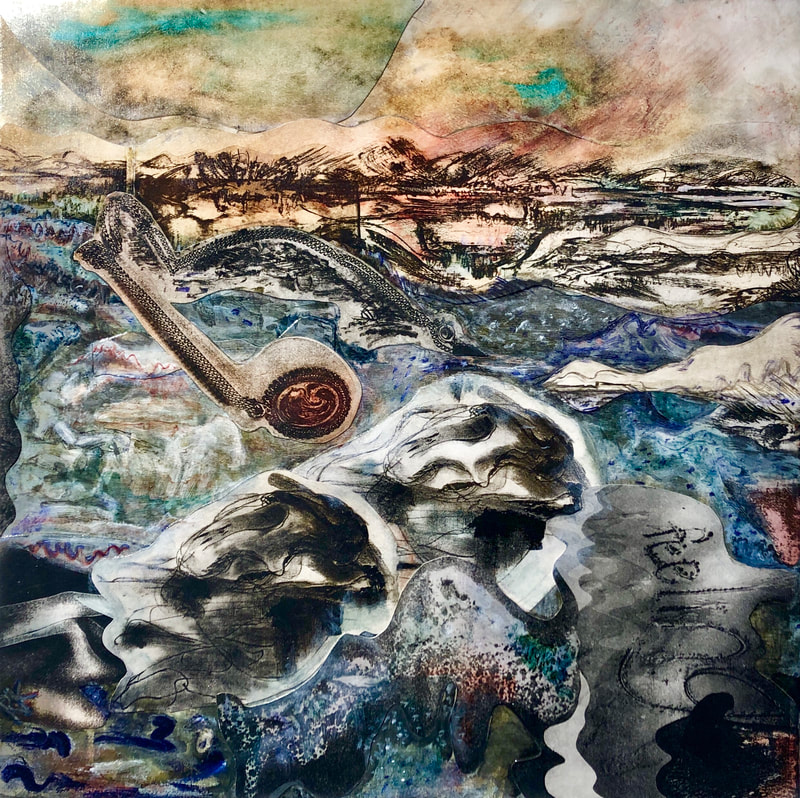 Rosina's artist statement reads:
"This year’s Mangawhai Printmakers annual exhibition sets a new team challenge: to explore not only traditional printmaking techniques and ideas, but also to look at contemporary, innovative approaches to printmaking. With this in mind, I decided to use a number of my Artist’s Proofs from previous printmaking series to create new conceptual works on canvas. Using the art of collage as my medium, and scissors, brushes, inks, charcoal and acrylics as my drawing and painting tools, each canvas became an interplay of traditional and contemporary etchings drawn into works that touch on dreams and memories."
Below:
Winner of Kaipara Art Awards 2019 in the category Mixed Media. The first of a series of new works. Title: Number One of Journeys 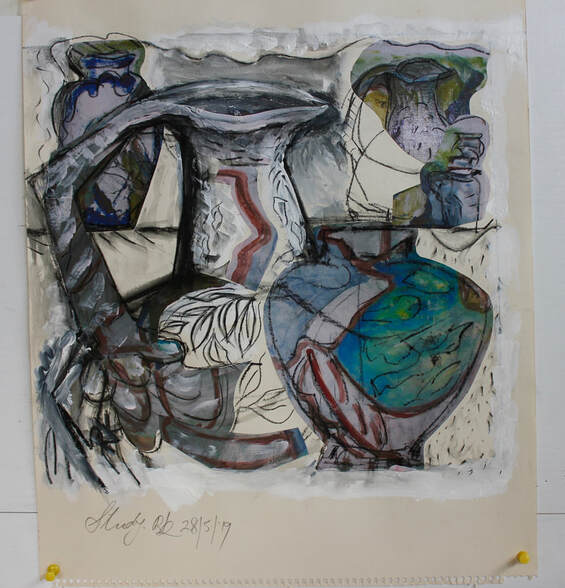 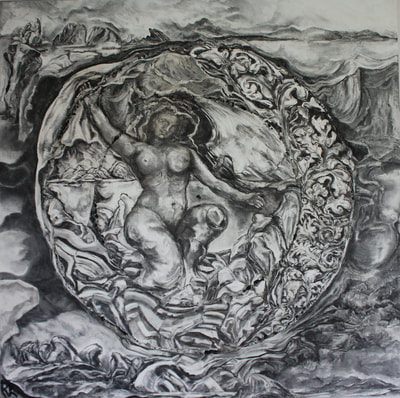 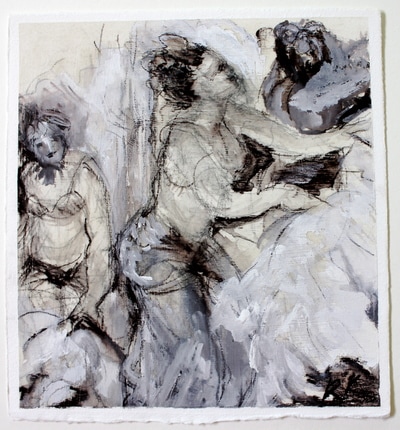 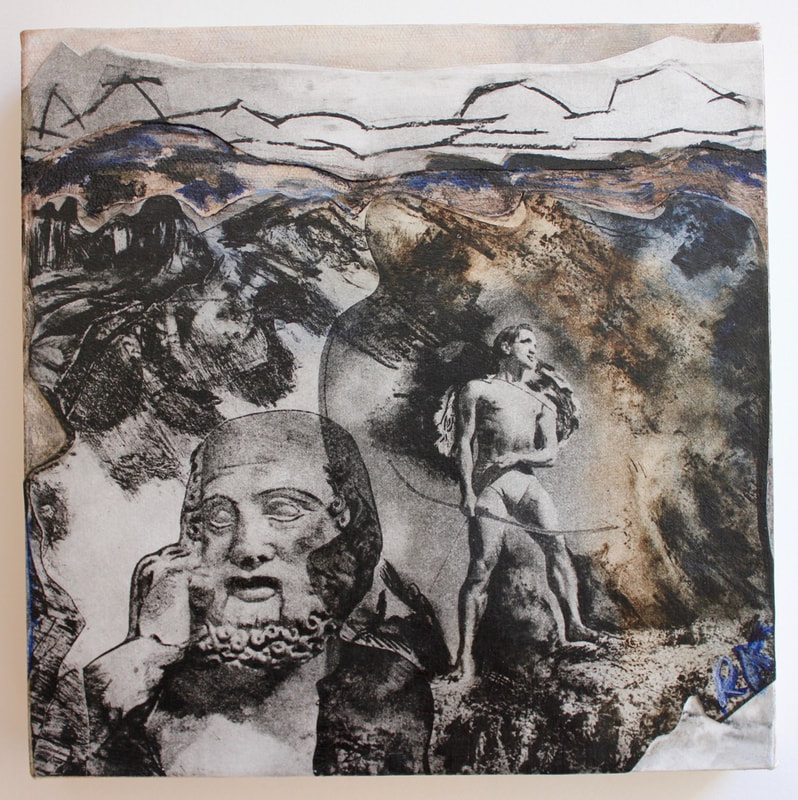 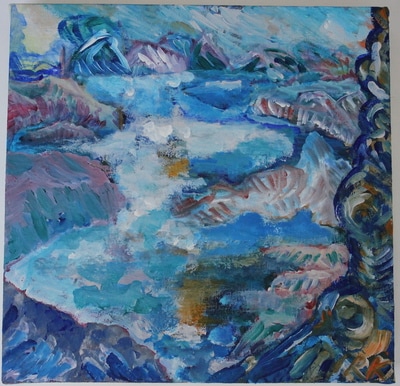 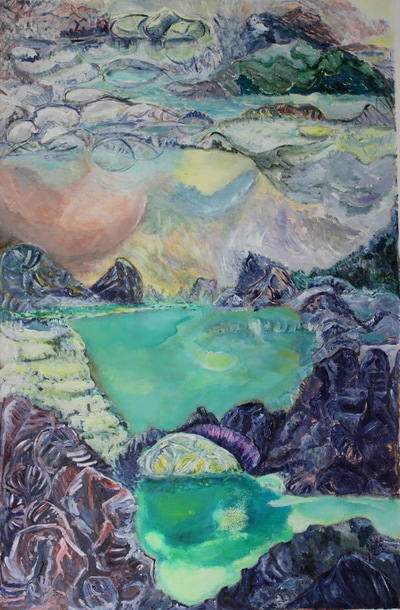 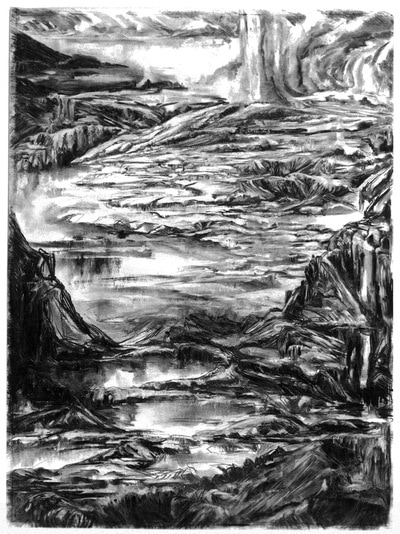 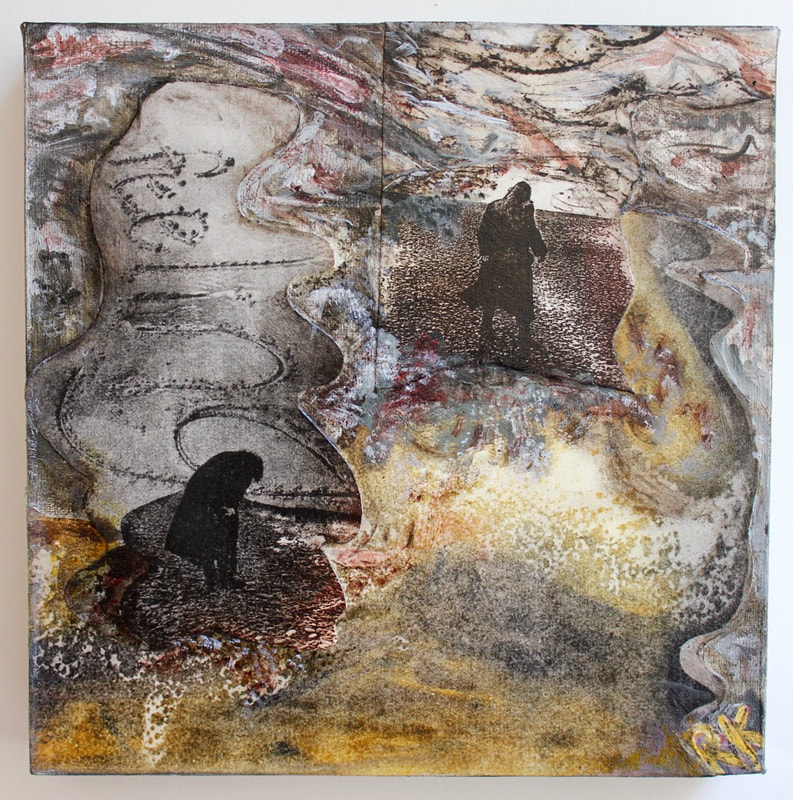 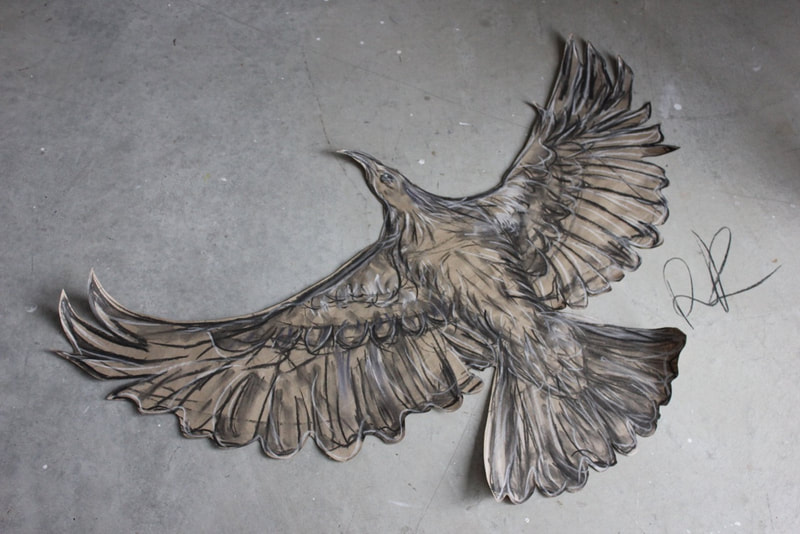 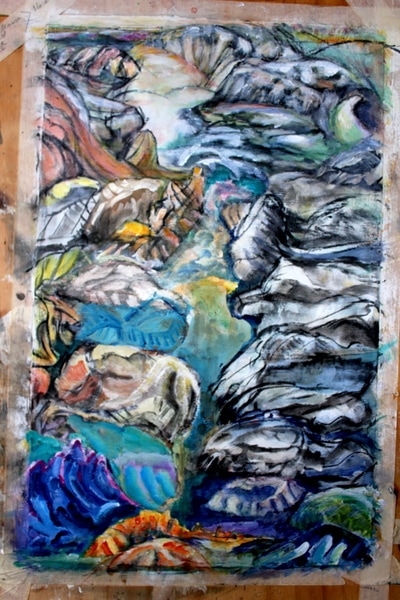 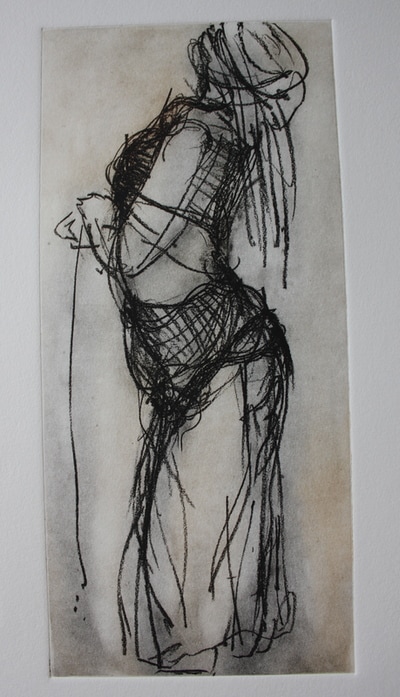 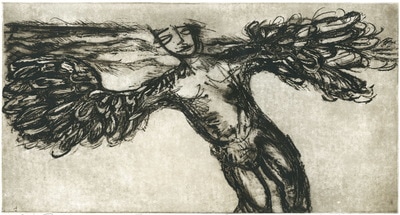 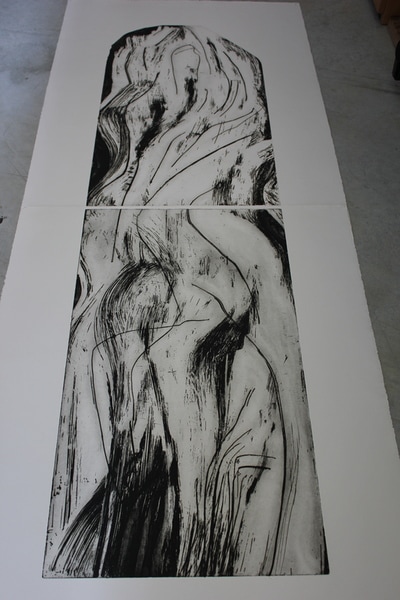 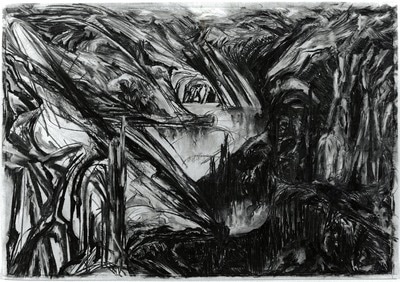 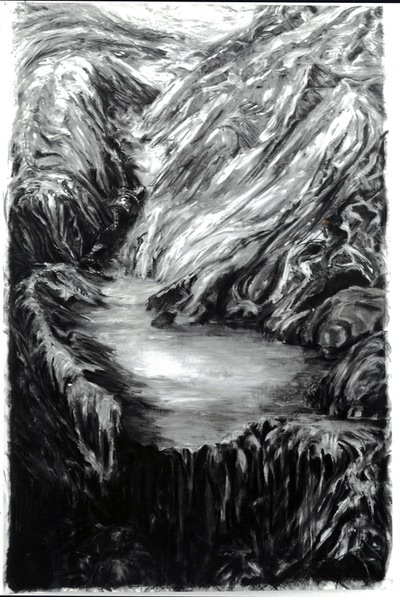