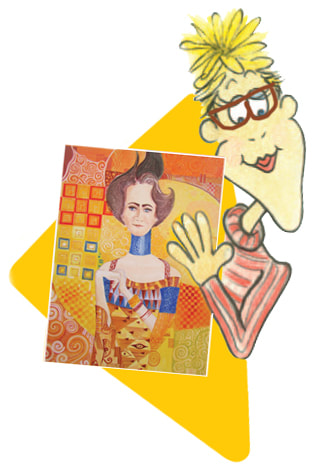 Janine moved to Mangawhai in early 2016. She grew up in Devonport on Auckland’s North Shore and completed a graphic design course in the early 1980s. Overseas travel was interspersed with freelancing both here and abroad, primarily in the publishing industry. An early interest in collecting Mickey Mouse memorabilia has evolved to include other popular iconographic images and she is exploring different techniques to interpret her pop culture ideas.

Last year Janine indulged in most of the workshops offered by Mangawhai Artists Inc, and alliteratively discovered the chalk ’n charcoal challenge, which totally conflicts with her craving for colour. She enjoys trying new techniques, and hopes to establish a style that suits her other interests, which include yoga and playing the ukulele. 'Uke-le-aliens of The World, Unite!’

Janine had the privilege of nursing her mother through her last 4 years of Alzheimers, so she learnt humour helps most situations, and that there is a strange beauty in imperfection; she values things that are 'a bit wonky'. As Leonard Cohen said: 'there is a crack in everything; that’s how the light gets in'.